RLS-Sciences works under the framework of the Regional Leaders Summit. The Regional Leaders Summit (RLS) is a forum comprising seven regional governments (state, federal state, or provincial), which together represent approximately one hundred eighty million people across five continents, and a collective GDP of three trillion USD. The regions are: Bavaria (Germany), Georgia (USA), Québec (Canada), São Paulo (Brazil), Shandong (China), Upper Austria (Austria), and Western Cape (South Africa). Since 2002, the heads of government for these regions have met every two years for a political summit. These summits offer the RLS regions an opportunity for political dialogue. 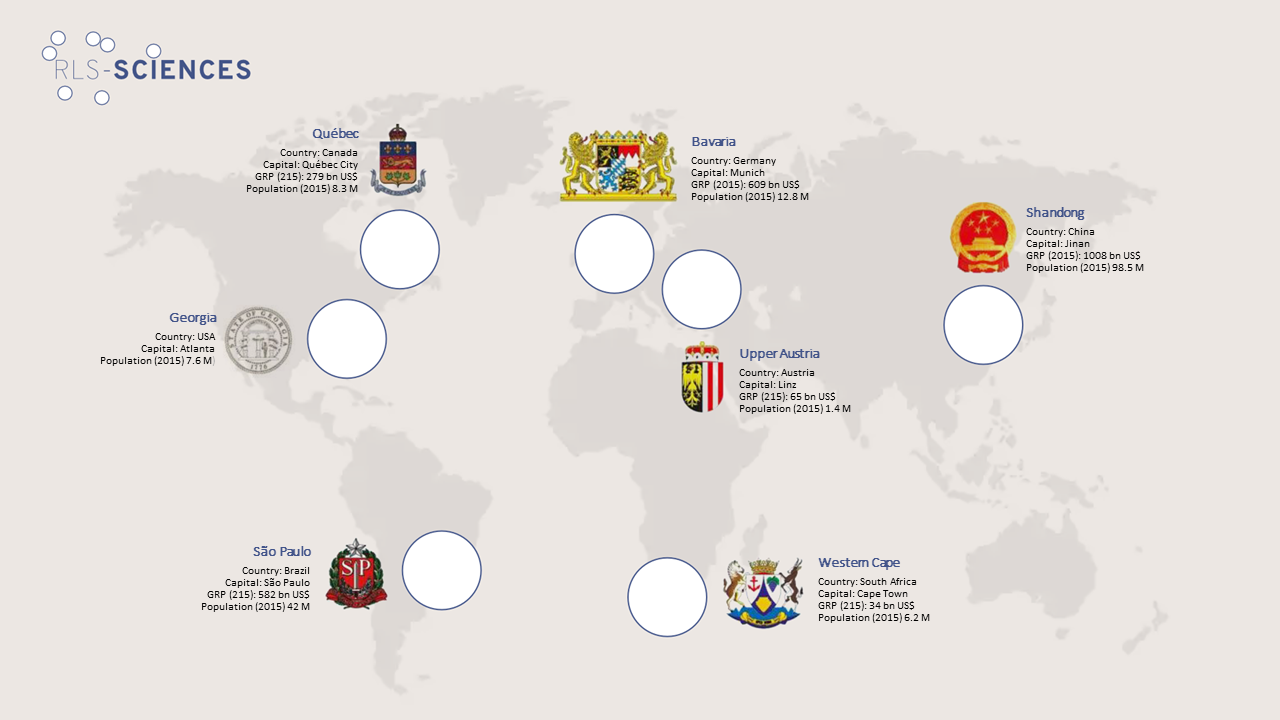 On April 12th, 2012, on the occasion of the Sixth Regional Leaders Summit in São Paulo, the RLS Member States adopted a Final Declaration which included the following commitment (Item 12):
This was the impetus for the creation of the RLS-Energy Network. The RLS-Energy Network served as the pilot project for RLS-Sciences, which was established in 2016. Upon the establishment of RLS-Sciences, four themes- including energy- were identified as having the highest potential for cooperation. These were developed into four projects, which were embedded into the 8th RLS Conference in Munich. First, a scientific presentation of the Small Satellites project was made directly to the heads of government by project lead Prof. Dr. Klaus Schilling. Then, on the final day of the conference, each project was presented. Read more about the scientific activities and presentations from the 2016 RLS Conference here. In 2020, the fifth project, the RLS-Digital Health Initiative, began and was officially launched as the fifth project in 2022.

The Regional Leaders have met ten times in the framework of multilateral summits, beginning in 2002.

The Bavarian Minister-President Dr. Edmund Stoiber hosted the first summit, held from January 30 to 31, 2002 in Munich, Germany, with the main topic of "Politics for Generations".

The second summit with the main topics of "Youth" and "Technological Innovation" took place at the invitation of the Prime Minister of Québec, Jean Charest, in Québec, Canada from December 9 to 10, 2004.

The third Regional Leaders Summit on invitation of Dr. Josef Pühringer, President of Upper Austria, took place in Linz, Austria, from July 11 to 12, 2006. Under the title "A sustainable future arising from a shared responsibility", the topics "Renewable Energy and Energy Efficiency" and "Education and Youth" were discussed. The Brazilian federal state of São Paulo participated in this Summit for the first time.

Following the invitation of the Governor of Shandong Province, Jiang Daming, the fourth Regional Leaders Summit took place in Jinan, China, from August 6 to 7, 2008. Topics of the fourth summit included "Resource-efficient society (energy and climate politics)" and "Public health care and provision". At this summit, the US state of Georgia was present for the first time as a partner region.

On invitation of the Premier of the Western Cape, Helen Zille, the fifth Regional Leaders Summit took place in Cape Town, South Africa, from September 27 to 29, 2010. Topics of this summit were "Integrated Transport" and "Food Security".

The sixth Regional Leaders Summit was held from April 11 to 12, 2012 in São Paulo, Brazil, on invitation of the Government of the State of São Paulo. The main topic of discussion was "Sustainable Energy and Development".

For the seventh Regional Leaders Summit, the Governor of the State of Georgia invited the Partner Regions to Atlanta, USA, from June 2 to 3, 2014. The focal points of this summit were “Global changes in logistical supply chains” and “Leveraging major sporting events for economic development”.

​The eighth Regional Leaders Summit was held in Munich at the invitation of Bavarian Minister-President Horst Seehofer, from July 14 to 15, 2016. The theme of the summit was "Digitalization and Innovation", and for the first time included presentations of RLS-Sciences projects to the political conference. This summit also marked the beginning of the "second round" of summits, as all regions had hosted.

The ninth summit was held in Québec, Canada, at the invitation of Québec Premier Philippe Couillard from 17-18 May, 2018. The theme was ''Energy Transition: Towards a low carbon economy''.

The tenth summit was held virtually and in Linz at the invitation of Upper Austria Governor Thomas Stelzer on 11 November, 2021. The theme was "Smart Regions".